written by The Traveling Gentleman July 2, 2022 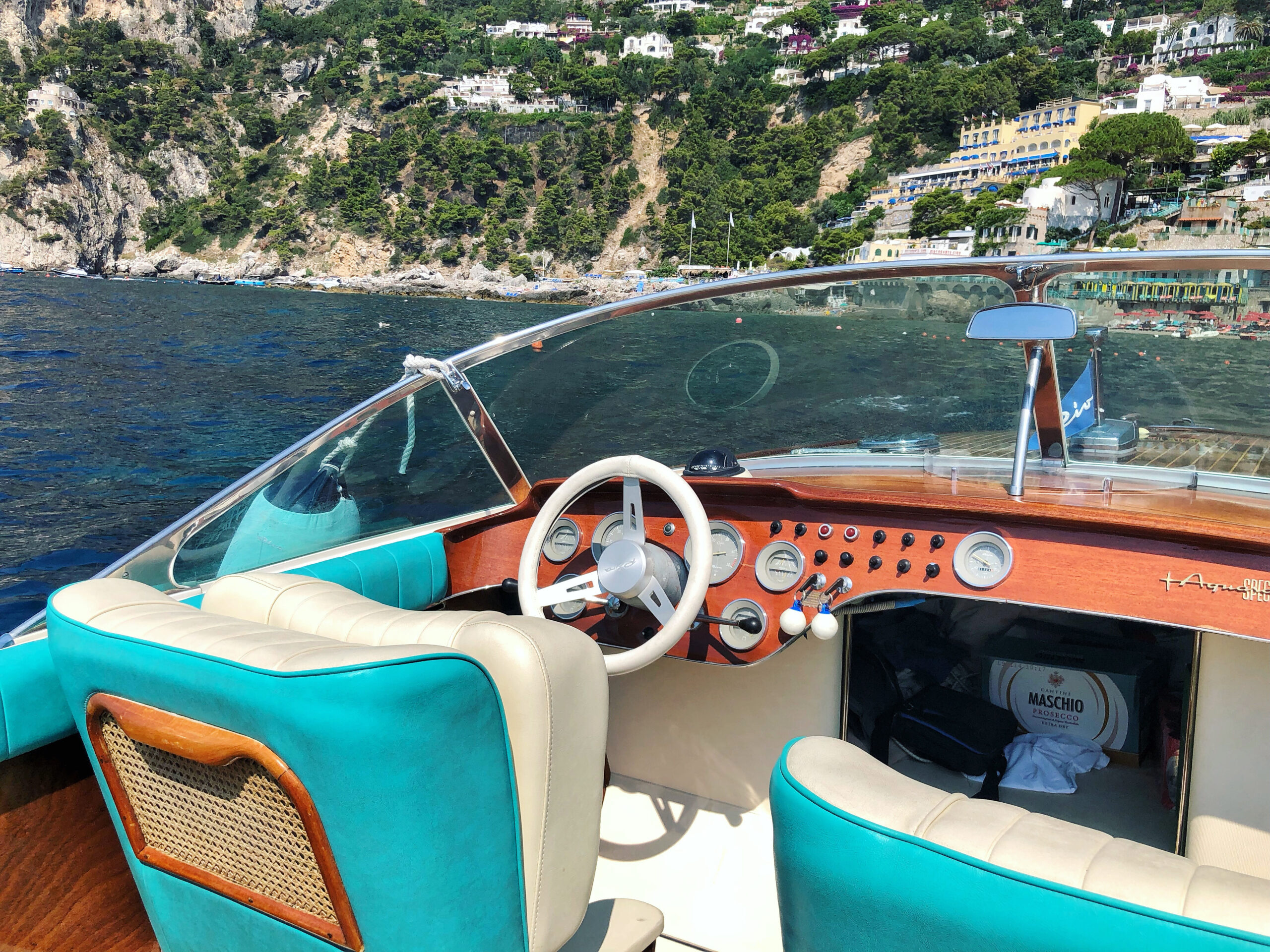 Of all the acclaimed designs from Italy’s post World War II period there is one object that truly embodies the glamorous days of Italy’s La Dolce Vita and that is the legendary Riva Aquarama. Nicknamed the “Ferrari of the Sea” the name alone evokes lush images of the 1960s international jet set spending endless summers in Capri or on the French Riviera.

As famous as the Riva boat itself is the list of Riva owners. Brigitte Bardot owned a 1959 Super Florida (no. 341) named Nounours (‘Teddy Bear”). The boat was a gift from her first husband, movie director Roger Vadim, with whom she had made the 1956 classic “Et Dieu… créa la femme”. The French actress had the motorboat moored at her Saint-Tropez villa La Madrague which she had bought a year earlier and her Riva would frequently be seen in the harbour of Saint-Tropez during the early 1960s. Swedish actress Anita Ekberg, the star of Federico Fellini’s film “La Dolce Vita”, bought a Tritone (no. 42), which was the first twin-engine Riva, during filming of this 1960 Italian masterpiece. Another famous actress that bought a Riva was Elizabeth Taylor. Together with her husband Richard Burton she owned a Junior.

For German playboy and heir to the Opel car fortune, Gunter Sachs, it was love at first sight. When in the early 1960s he saw a group of Riva boats in a remote part of the port of Monte Carlo he was so fascinated that he immediately ordered a single-engine Super Ariston Launch (SA 474) which he named “Dracula III’. Sachs recalled in an interview: “What was floating in front of me was Italian style at its best, combined with the precision of a Swiss clockwork and the reliability of US elite engines.” His Riva was delivered in Lausanne on the 14th of July 1962. The flamboyant millionaire must have loved “Bastille Day” because exactly four years later in 1966 he became Bardot’s third husband. Vive la Rivalution! Even though the marriage only lasted a few years, his love for Riva’s lasted and after his first purchase Sachs ordered two more Riva’s, an Aquarama and a Super Aquarama.

Carlo Riva presented the Aquarama to the world in November 1962 at the Milan International Boat Show with the slogan: “Sole, mare e gioia di vivere” (sun, sea and a joy of life). Carlo was the great-grandson of Pietro Riva, who started the family’s boatbuilding business in Sarnico, Lake Iseo, in 1842. The luxury mahogany twin-engine speedboat was based on the hull of the Tritone and just like the Tritone Aperto it had an open sunbathing area. “The Engineer” was a passionate gentleman with a great sense of style whose goal was to build a boat that was “the best of the best”. Riva was a true perfectionist that cared about every single detail. The 1962 prototype (basically no. 214 of the Tritone series) was originally called Lipicar, named after his three daughters: Lia, Pia and Carla. The name Aquarama was inspired by the panoramic Cinerama movie screens of that time which resembled the boat’s curved windscreen. In the first production year 21 Aquaramas were built and Sophia Loren was one the first owners: Aquarama no. 3, the second one in production, was delivered to the Italian actress in March 1963.

The luxury mahogany runabout soon became a must have for the rich and famous whose playground was the Côte d’Azur and the Italian Riviera. Over time the Riva Aquarama has reached a truly legendary status within the nautical world and far beyond. A timeless design that combines quality, craftsmanship, style, beauty, performance and much more. Top Gear’s Jeremy Clark called this wonderful creation “the most beautiful thing ever made” and who could argue with that.

Over a period of slightly more than 30 years (production stopped in 1996) only 769 Riva Aquaramas were produced of which roughly 600 have survived. Besides the exceptional one-off Riva Lamborghini (1968), commissioned by Ferruccio Lamborghini, these are the different Aquarama models:

Varenna: one of the most beautiful towns on Lake Como

Great page and nice to know. Thanks

Thank you so much!